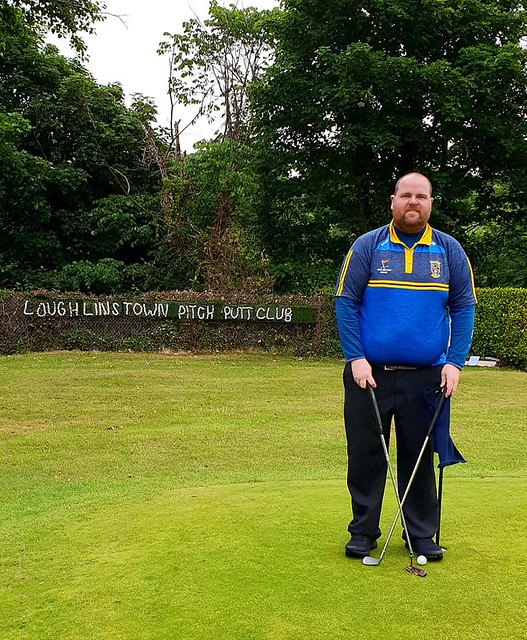 John Manning speaks to National Senior Gents Strokeplay Champion John Ross Crangle about life during Covid-19 for the Loughlinstown member as well as his plans to mark the anniversary of last year’s win.

When John Ross Crangle took a job in a supermarket in South Co. Dublin back in the early days of the millennium, he didn't expect to one day be on the frontline of a global crisis. “I am working in grocery retail. I have worked in the industry for 17 years now but changed to a new store and company, after 16 years with Supervalu, just before Christmas last year,” explains the reigning National Gent’s Strokeplay Champion.

JR comes face-to-face with potential threats each day in the form of the coronavirus pandemic as Dunnes, one of Ireland's biggest retail chains, were one of the few companies still open for business during the lockdown. Retail workers like JR have had to go into work every day and put themselves and their families in danger of catching Covid-19 whilst keeping all of us customers alive. “Working in Dunnes Stores, Cornelscourt (Dunnes’ flagship store), we are always busy anyway but the reaction to the current pandemic made our usual Christmas rush feel like a normal day at the office. Luckily, things have calmed down in the past few weeks.”

Supermarket personnel like the two-time Dublin Senior Strokeplay winner have found themselves adjusting from a more functional role to a strategic one, necessary for national survival.“I actually changed to the night shift in work so the dealings with customers are few and far between.”

Another staple of John Ross Crangle’s life came into being in 1971 just four miles down the road from Cornelscourt Retail Mall, (opened by Dunnes in 1966 as the country’s first out of town shopping centre). Leafy South County Dublin’s only affiliated Pitch & Putt course is the lush green sward and sylvan parkland setting of Loughlinstown.

The last couple of months have been weird for a person so immersed in Pitch and Putt. “As someone who plays very little through the winter, I was just getting accustomed to playing once again just before Covid-19 took over. It has definitely been missed, the people in the game even moreso.” Has JR practised at home? “I was never one for practising anyway but I did put down a mat for chipping and putting but only for a few days, out in the back garden, before boredom set in!”

The ‘Lougho’ legend admits to coping reasonably comfortably with the enforced playing hiatus. “Quite well, actually! It certainly gave me more incentive to get up and help on the course a bit more, something I always tried to do but probably never did enough.”

And the efforts have paid off in spades. “We’ve done a lot over at the course within the two months, minor jobs here and there, but they were jobs that were not being done before and have cleaned the place up. Some fresh paint in the clubhouse has certainly brightened up the place.”

What are the secrets to the Loughlinstown course looking so well? JR emphatically gives primary credit to the 1982 Dublin Strokeplay Champion and the man who helped the “boys in blue” to the 1982 Inter-County at Cloghogue. “Plain and simple, Pat Kelly.He’s an absolute workhorse with the course running through his veins. He is there every single day without fail and, with a few people up giving him a hand, it has been brilliant for the club.”

JR is gratified and excited about all the new and returning Pitch and Putt members in Loughlinstown and elsewhere around the country. “With Pitch and Putt, we have an amazing product, a game that can be played by anyone and all, potentially within an hour. I think with us being a non-contact sport at this moment in time it is of huge benefit with current social distancing and that has seen us have such an increase along with social media interactions.”

Crangle’s golfing doppelganger Shane Lowry will experience a delayed defence of his Open championship title just as the Dublin Pitch & Putt superstar will undergo a deferred defence of the Donnelly Cup. Does JR think that the Strokeplay will be played this year? “As much as I would love to see it going ahead, I just don't see it happening. I think that county boards could be let host maybe their main Championships as travelling could be kept to a minimum. Job insecurity, loss and cuts could also have a negative effect on entries and with costs of travelling nationally along with accommodation for an Irish Championship sometimes necessary, it leaves the NEC and all boards in very tough spots.”

The 2017 National Matchplay champion doesn’t think itwould feel would feel any different, should he be asked to defend his Irish Strokeplay title at an unusual slot on the calendar. “I don't mind defending it any time of the year. Make no mistake, defending this title will be the toughest of tasks, considering the finals will be in Cork but I do travel well and have performed well there in the past. I was a little overwhelmed in Tullamore, defending the Matchplay and felt it that weekend. Maybe that experience could help me when the time comes.”

On July 11th, John Ross should have been completing his final preparations to tee it up at Collins along with 79 contenders to his National Gents Strokeplay Championship crown. Instead he has decided to mark the original planned date for the defence of his title with an 18 round marathon on home turf. How did that come about? “It was just a chance conversation that sparked my mind. I was asked about the band around my left wrist, which is a band I have worn since I went to a Suicide or Survive Wellness Workshop in a local set-up, by two local podcasting friends. I had just donated to a friend's charity run and I guess the brain just clicked.”

How does he see the day (the proceeds of which will entirely go to the Suicide or Survive Charity) panning out? “I honestly don't know how it's going to go. I had timed it out that I would play five rounds from 6am so would hope to have them done for 8.30am to give myself a small break for breakfast and before the two ball scrambles take place from 9am. The same idea was to break up at lunch at 1pm before going again half an hour later with the final few partnerships until around 7pm before the final four single rounds. The idea was to leave the singles at the end so I could pace myself the way time might allow near the end, be it speed up or slow down.” Brendan Lawlor, nowadays the World’s fourth ranked Professional Golfer with a Disability and the 2013 National Pitch & Putt Intermediate Strokeplay Champion, will accompany JR on two of the partnership rounds and the rest are up for auction!

Some people have said 18 rounds in a single day is ambitious but JR isn’t having any of that. “I don't see it being a problem, time or light wise, unless it is a very dull day but with it being the height of Summer I would hope the odds are in my favour. However, I'd never take our weather for granted! It may be a bit ambitious as would not be the lightest person in the game but the course itself is fairly flat in comparison to many I have played, so it definitely falls in our favour that way.”

Six-time Leinster individual champion JR recently clocked 25 minutes for a round by himself at Loughlinstown, which seems pretty impressive? “That really was a speed round for me. I was never the quickest player but would never consider myself slow either. Playing that bit quicker certainly caused a few missed putts and some rushed swings, as it was unnatural to me. The flags are currently held in the hole with a raised insert in the cup, which will certainly help with the timing.”

No stranger to Pitch and Putt records,Ireland’s No. 3 ranked player is already planning another marathon to challenge a six-year-old Dutch landmark. “While thinking of challenges to do, I researched a little about Pitch & Putt world records and came across the most holes played in one day.”

That World Pitch & Putt record was created on Friday 20th June 2014 when Papendal Pitch & Putt owner Suzanne Bosch and Papendal member Tim de Goede played 25 rounds in one day as a two-ball. Suzanne and Tim were in action on Papendal Pitch and Putt near Arnhem. The intrepid Netherlands pair played only during daylight, starting at 4.30am and finishing at 10pm. Suzanne and Tim played for a good cause - the Dutch Heart Foundation.

Suzanne and Tim were supported right through the eighteen and a half hour day and special thanks went to those who helped the duo through final few rounds, when they were understandably flagging, having walked nearly 50km. Grateful thanks were extended to all sponsors and also to Pitch & Putt Papendal for supplying food and drinks all day.

“That equates to 450 holes so that is one that I will hopefully be looking to do next year as timewise it just wasn't viable to get prepared and do this year,” enthuses JR. “Timewise though it may be tricky considering it will have to be done mid-season. We will see how next year’s calendar turns out before fully committing to it.”